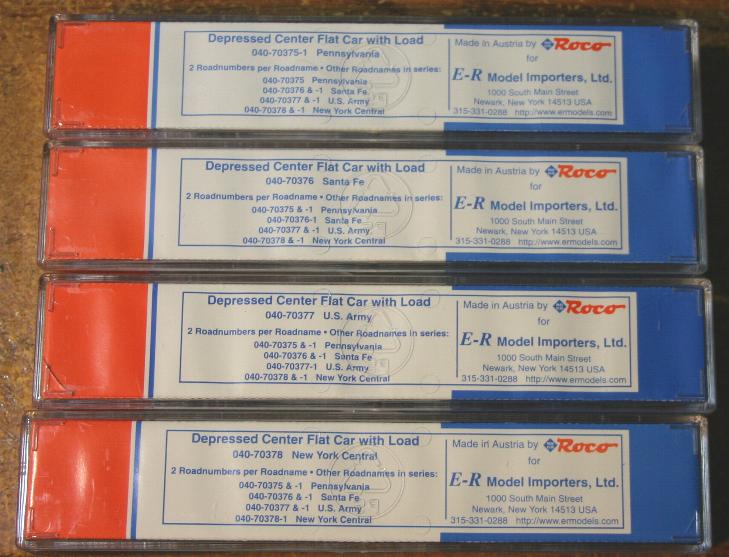 BONUS! Here are images of the E-R Models releases of this car type, added to my accumulation mostly in Summer 2013. These were commissioned by E-R (now out of business) and were made by Roco as the liner label above clearly states! As with other E-R Models runs, I believe these were quite limited in quantity. I was able to grab seven of the eight road numbers in one shot from a local dealer who had acquired a large stash of model trains, including, apparently, the remainder of the unsold E-R merchandise. I already had the eighth road number, so that allows me to share with you the entire series. And yes, that means that the later run had double the roadnames, and quadruple the releases, of the original A1G issuances.

I should note that while I'm certain that I have all of the road numbers, I'm not at all sure that I have all of the road number plus load variations. As you can see in the photos, there are four distinct-- and interchangable-- loads furnished with these cars: a cable reel, an electrical transformer, an army tank, and an army transport. There's no practical way to confirm that the same loads were always supplied with every copy of each car. Also, whether a black or brown body, each of these cars has a deeper brown (like a red/brown) floor.

What's more... it's apparently true that these are not based on the same tooling as the A1G cars. It's been pointed out that the E-R cars are actually clones of the Minitrix cars, which were also marketed by Aurora in the "Postage Stamp" line. The tooling is very close, but not exactly the same as the A1G version. I'll leave the list and images here anyway... if only because it took so long to get all of these!

Table of Releases: Where available, click on "Image" to popup an image of the actual car.